The Grammar Editor allows you to write about your language in plain English, as well as generate grammatical affixes that can be used in the translator.

You can insert a grammar table into Grammar Editor using the Add Grammar Table button:

The above settings insert the following code into the Editor:

which, in turn, generates random affixes, possibly something like this:

means that the affixes generated in this table are meant for all verbs, whereas pulls the conlang word for “learn” from the dictionary () simply to be used as an example in the table.

indicates the grammatical values that the table will generate affixes for. The values are placed down the rows of the table. You may change the default values! The example below has added “remote past” (a feature in Italian) and has removed the future affix (English has no future affix).

tells the program to generate a random affix for that value. But you can custom define what the affixes are. For example:

This example partly mimics English by making the past , present has no affix at all, and makes a prefix for the future tense, instead of a suffix. You may custom define all of the affixes, or just some.

There is much much more that can be done with custom affixes, so check out the complete guide here.

You can optionally translate each cell by writing after the affix tag name and before the sign:

Clicking + fuse with another property adds another grammatical property into the same table (along the columns of the table). This means that each affix in the table will encode two properties (“fused” properties). In this example, each affix expressed the verbs tense (whether it’s past, present, future) and person (whether the doer of the verb is 1st person, 2nd person, 3rd person): 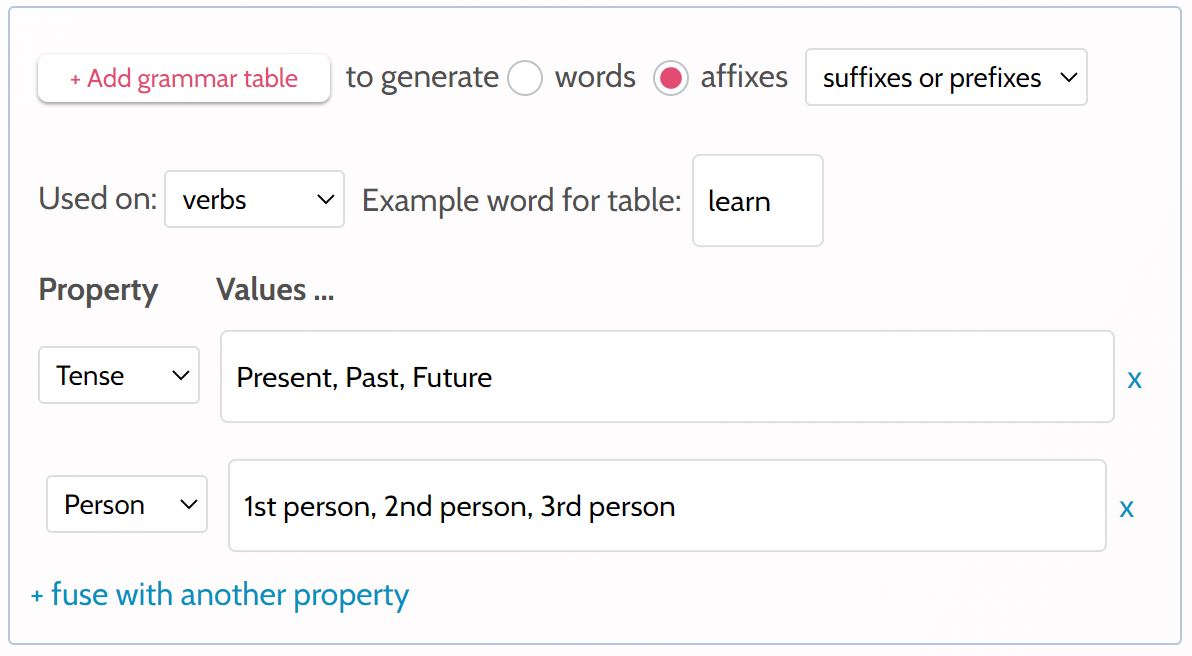 Here, the suffix means the verb is in past tense and being doing by the 1st person. So when applied to the verb for “learn” it becomes , meaning “I learned”.

Some languages have a tendency be fusional, whereas others have just a single grammatical property per affix. These are known as agglutinative languages. To create agglutinative affixes, you effectively need to create two separate tables, one for tense and another for person.

Now the translation for “I learned” would require the past tense suffix , then the 1st person , producing .

If you want a word to have its own irregular conjugation, you need to create a whole extra table and manually enter the line . This table would make just the word (“dog”) be pluralized as :

A single irregular table can target multiple words by comma separating them, e.g.

If your language has noun genders, you can choose to pull example words from the dictionary for each gender:

Vulgar sometimes has a difficult time translating complex rules into plain English. If the program is struggling, you can write your own plain English explanation under the rule, starting with a double quote character:

Words generated in word tables automatically get pushed into the main dictionary.

Same as affix tables, you can specify what the word will be using the equals sign:

And you can specify exactly what each word translates to in the dictionary using the sign after the name:

Some confusion can arise with English pronouns, due to the fact that gender is only expressed in some of its pronouns. English’s 3rd person has three genders: “he”, “she” and “it”. However, all other pronouns are gender neutral: “I”, “we”, “you”, and “they”.

Furthermore, English doesn’t have a singular/plural distinction in the 2nd person “you”, whereas 1st person does (“I” vs “we”) as does 3rd person (“he/she/it” vs “they”).

This inconsistency makes it difficult to divide English pronouns neatly into Vulgar’s rows and columns. The simplest thing may be to select the “custom” property and put every pronoun own its own row, like this:

If you want to make a different pronoun system to English, you need to decide if want your conlang’s pronouns to fit neatly into the rows and columns of a table, or if there will be some level of irregularity, like the English system. Next, regardless of whether they fit neatly into a table or not, you will need to figure out how each conlang pronoun translates to its English equivalent(s). Here is one possibility using a simple “neat fit” system where every conlang pronoun expresses person (1st, 2nd or 3rd) and gender (masculine or feminine) but not number (singular vs plural):

Getting words from the dictionary

In the body of the grammar editor, you may pull conlang words from the dictionary using double curly brackets around the English word, eg: {{man}} will be replaced with the conlang word for man. This is helpful if you don’t know the word ahead of time. You can also apply affixes to this, eg: {{man-PL:N}} will add the plural form for nouns (assuming your language has this affix).

(Be aware that although the affix abbreviation would have been in the table, its part-of-speech is added to the end so that it becomes when it’s attached to the word. This is because there could be a plural affix for a different part-of-speech which differs from the noun affix.)

{{Langname}} can be used to pull the language’s name.

Create boxed off sections in your grammar by typing three dashes

in the Grammar Editor.

Regular tables can be inserted inside a code-block using Markdown-style formatting:

Note: even though this uses affix tags in a similar fashion to other areas in Vulgar, this section does not do the translation for you. Why? Because Vulgar’s affix tag system only partially replicates a proper linguistic gloss. For instance, you can encode an circumfix into a single affix tag. However the glossing convention is to show a morpheme-to-morpheme correlation, which means the circumfix tag should be shown at the beginning at the end of the word:

Manual translations also allow you to mark the morpheme boundaries in the conlang word, and follow other glossing conventions.