Note: this information pertains to version 9.3.2 and earlier. For 9.4, see this page.

The Grammar Editor allows you to write free-form documentation on your language, as well as create grammatical affixes that can be used in the translator.

Hint! Use the Noto fonts whenever you're writing something in IPA. They cover all the IPA symbols. 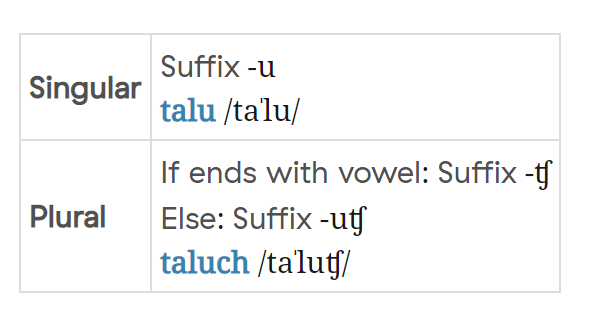 indicates that the table has just 1 axis, and its column names are comma separated. means part-of-speech, and means that these affixes apply to nouns. pulls the conlang word for "dog" from the dictionary and applies the affixes to this word.

creates a random affix for the "Singular" (S) cell, as does NOUN.P for "Plural".

You can tell the program what the affix will actually be by calling these abbreviated names in the table.

This mimics English affixes by making the plural an suffix, and indicates that the singular should be no affix at all. You may specify all or just some of the affixes. There is a lot that can be done with custom affixes - see complete guide here.

More axes can be added:

In the case you are creating multiple noun genders, you can choose to pull different words from the dictionary to match the genders, eg:

You may also translate each cell writing > after the affix tag name and before the = sign. Eg:

If your affixes use complicated Regex rules, you may wish explain them in plain English by writing line(s) immediately below each rule.

Words generated in Word Table automatically get pushed into the main dictionary.

Same as with affix tables, you can specify what the word will be using the equals sign:

And you can specify exactly what each word translates to in the dictionary using the > sign after the name:

To make an English pronoun table in Vulgar, you have to combine properties all onto one axis like this:

But English has different set of pronouns for who is doing the verb (I, he, we, etc.) vs who the verb is done-to (me, him, us, etc.). These are known Nominative and Accusative cases. So you may choose to add an axis for these cases:

If you want to make a different system, you need to decide what properties you want to express in your pronouns, and decide if they neatly fit into a 2/3 dimensional table or if they need to be combined into one axis, like English. If it's the former, you will need to figure out what these words translate to. Here is one possibility:

Getting words from the dictionary

In the body of the grammar editor, you may pull conlang words from the dictionary using double brackets around the English word, eg: ((man)) will be replaced with the conlang word for man. This is helpful if you don't know the word ahead of time. You can also apply affixes to this, eg: ((man-NOUN.PL)) will be replaced with the plural version of man.

Create boxed off sections in your grammar by typing three dashes --- in the Grammar Editor.